Challenges
Improvements
We were having trouble concerning unsatisfactory printing result against demanding accuracy, or difficulty of faithful expression of gray color.
JV100-160 has almost accurate printing result as we expect, allowing us to work on urgent projects with confidence. And the application of orange and light-black inks of JV100-160 expanded the color gamut, resulting in faithful color reproduction and provided a wider range in expression.

A case study of Central Co., Ltd. installing our JV100-160 was featured in the “Voice from the Inkjet Output Field 2022” on the “Signs&Displays” monthly magazine (August 2022 issue) for the outdoor/transportation advertising industry.

The following is the published article in its original form.


Working beyond the line of business brings new knowledge and expertise.

Engaging in construction for a long time, Central Co., Ltd. has marked 54 years since its foundation. To enhance the capabilities of its signboard and display division, the company established a Sign/Display subsidiary six years ago. Reorganized as Central S.D. Inc. (hereafter Central S.D.), the company offers a wide range of services from signboard and display production to store interior construction. In this interview, we asked Central S.D. about recent developments in their inkjet printing business. 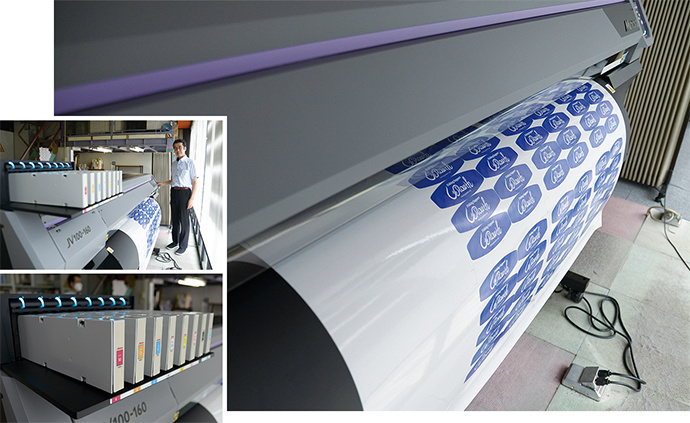 Recently, the company has been seeing an increasing number of orders for special exhibitions, with output amounting to more than 100 m2 per month in total. 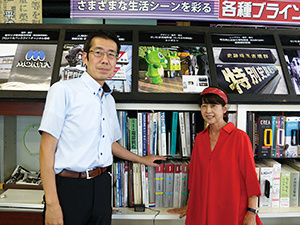 Featuring the Dot Adjustment System (DAS), a function enabling the automatic adjustment of dot position and feed volume affecting the print quality in printers, JV100 is a product focusing on the production of beautiful printouts without any hassles. The printer is also equipped with the Mimaki Advanced Pass System 4 (MAPS4) to reduce banding and color irregularities to achieve even better prints, and Nozzle Check Unit (NCU) and Nozzle Recovery System (NRS), which detects and reactivates dormant nozzles automatically. Highly productive with a printing speed of 20 m2/h, JV100 is well received as an entry-level machine with a good balance of operational performance, image quality, speed, and cost.

"We introduced the JV100 in April of this year," said Ms. Etou, President of Central S.D. "We use it for many graphic-related jobs, including store-wall signs and window decorations. Mimaki has been very helpful in following up with us after its installation, including maintenance." According to Mr. Sakamoto from the design and print section of the company, "The printer we had previously produced lots of blurring when doing roll-wise output. Blurs are fatal, especially when we need to use registry guides to cutout the outlines after printing. JV100 has almost no blurring, a real relief when we have to do something in a hurry.”

In addition to signboards, the company has been receiving an increasing number of museum exhibitions signage orders recently, and are often required to print graphics for panel displays. In total, the company produces more than 100 m2 of inkjet output per month. 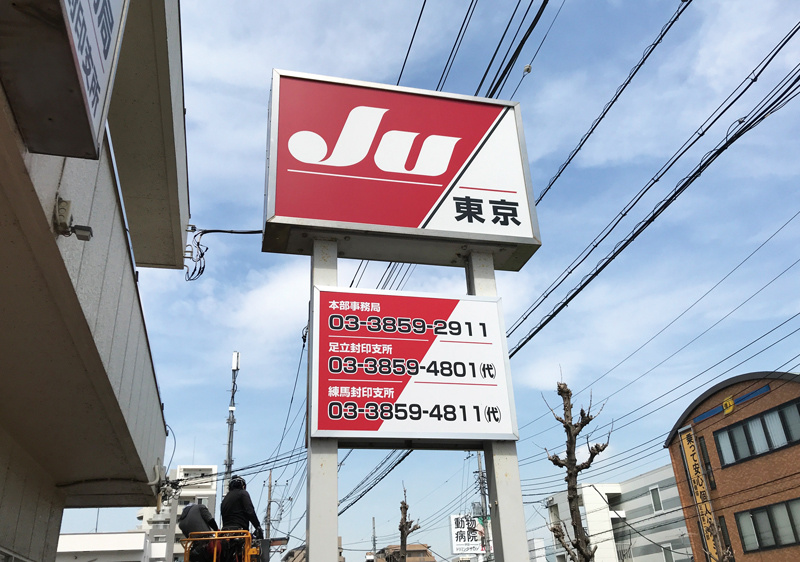 One latest example (as of July 2022) of signboard production by Central S.D is the Canine shampoo store "DOG SPA HANA" (Minuma-ku, Saitama Prefecture):

The store is a remodeled former hair salon. The existing pole sign was painted dark blue, refitted with a new sign, and a sign was added to the wall facade. Additional graphics -- "the graphic of a doggy entering the shop, envious of an another doggy having a good time receiving the shower treatment” and cut-out letters were deployed in the window. "JV100 was used to express the concepts of the customer,” Ms. Etou explains. 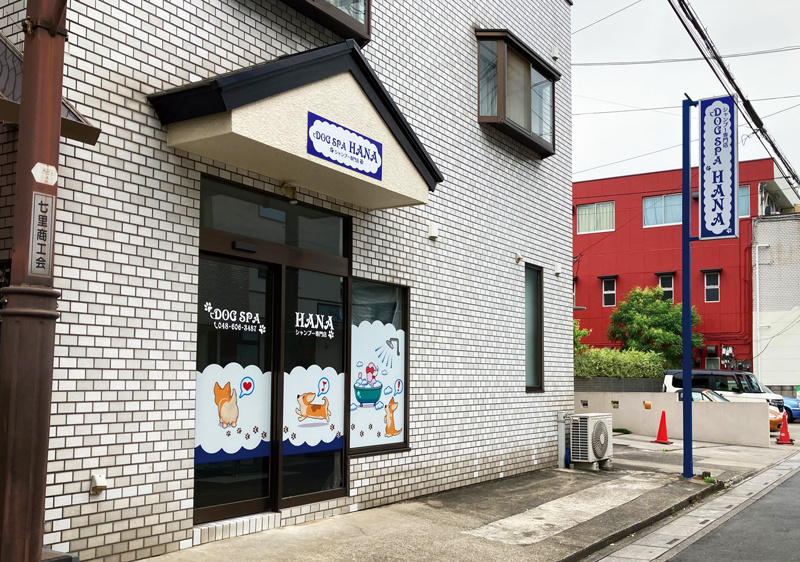 Orange and light-black inks to broaden the range of expression

“When imposing prints, vacancies may exist among the media depending on the form of the output. The capability to insert outputs from alternate customers in the unused area for simultaneous output has been a big help. We find it beneficial to be able to print efficiently without wasting paper. Also, older printers used to require a large area (of media) even for test prints. JV100 helps reduce the waste by generating smaller images in the corner." Signboard-related jobs often involve producing complex designs, the reason the company finds this imposition function so appealing.

Central S.D uses Mimaki SS21 eco-solvent ink. Low-solvent type inks such as this product is in high demand for indoor and outdoor signboard and display applications. With the addition of orange ink as a process color, it covers approximately 94.8% of the PANTONE color chart in approximate colors. The broadened color gamut enables the depiction of freshness in food products, as well as the reproduction of corporate colors.

Light-black ink has also been added, allowing for the achievement of gray balance without color shifts or tone jumps in the grayscale output. The new ink enables faithful color reproduction of monochrome data, human skin tone free of graininess, and smooth gradations. "Orange color development is splendid. Also, we used to have a reddish tint issue with gray output, but the problem has improved (with the addition of the light-black),” says Mr. Sakamoto. 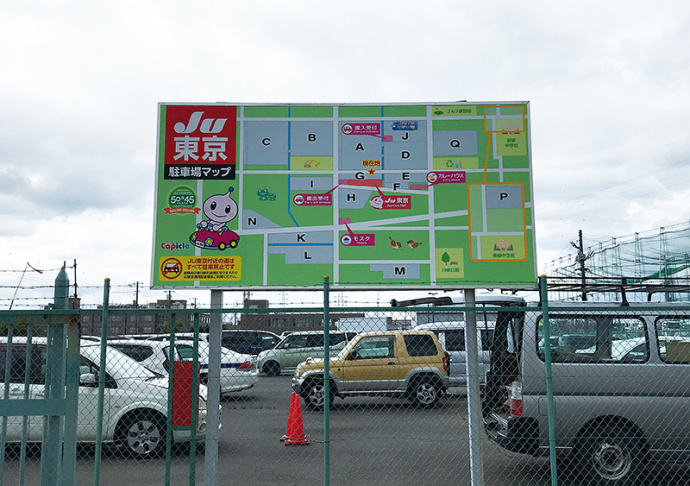 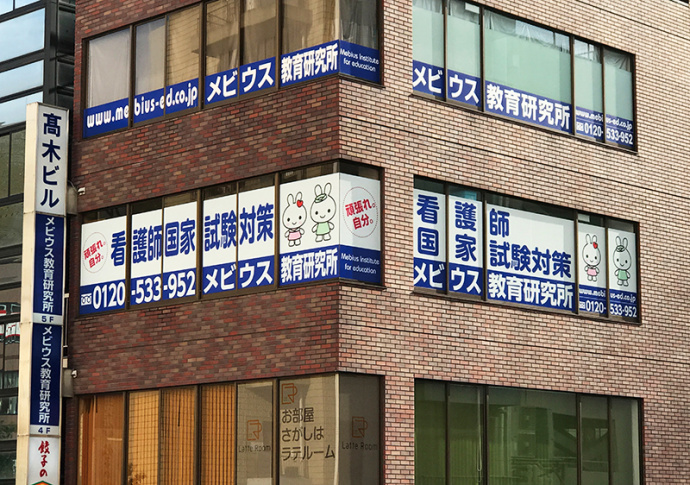 Cherry-picking between analog and digital

As mentioned above, Central S.D not only manufactures signboards, but also engages in interior work, which is a major strength of the company.

“Customers wanting to make signboards come to our company. They are sometimes surprised to see the interior decor lined up in our company. "So, you do interior work as well?” We can do both interior design and signage, and I think that differentiates us from other signboard shops," says Ms. Etou.

“We don't turn down jobs outside of our normal line of business," she added with conviction. “Even if it is something new to us, we try to think of ways to make it happen. It gives us a great sense of accomplishment when we actually carry it off, and it also brings in new knowledge and experience for us.” 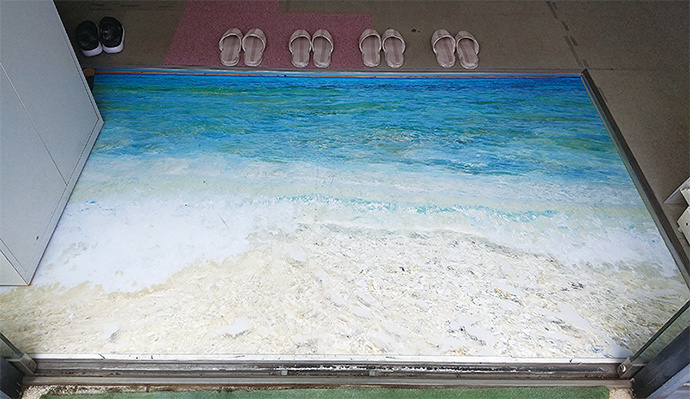 The matting at the entrance of Central S.D.'s office features a refreshing waterside-inspired graphics. This is also done by inkjet printing.

The company also handles digital signage (hereafter, "signage") such as LED displays. The company began working with signage six years ago, and has delivered to government offices, real estate agencies, and vocational schools.

“I don't think analog signage will ever go away completely, but the demand for digital signage should increase even more in the future. Therefore, it is best to be able to do both analog and digital signage," Ms. Etou says. The ability to offer inkjet printing and signage as a package is one of Central S.D's great strengths.